This Time article about how “lady authors” were told to promote their work (“do a workout in a bikini”) reminded me of How to Pose like a Man, in which a female author decided to cross the gender divide in author photos and pose the way male authors do.

Except the way male authors pose is mostly embarrassing.

Not all of them. Many try to come across as basically reasonable people: they’re smiling or thoughtful and posed like they’re at their ease. They’re not trying to come across like MRAs desperate to convince the world that they’re “alphas”.

To be clear, I’m not saying the authors are MRA types, just that they have unfortunate author photos. And author photos are tough. Believe me, I know. When it was time for mine, we took hundreds of pictures trying to find something that wasn’t ridiculous and horrible. So I know how it feels to look at a roll of film and go for the least worst.

Even so, when a camera is pointed at a dude, too many try to look grim and dour, as though they’re the badass action heroes they see in the movies. And I can’t help but wonder “What impression do they think they’re giving with this picture?” Because it’s not “Badass action hero.”

Originally, this post contained a bunch of actual po-faced author photos, but I didn’t like singling anyone out for mockery, even if they’re bestsellers, or if they’d passed away. Instead I’ll just say this, generally, to male authors getting their picture taken:

Don’t be afraid to smile.
Don’t want to smile? Try for “thoughtful” instead.
Don’t try to look like you’re an action hero yourself, even if you write about them.
And finally:

By the way, here’s my author photo: No kidding, this is the least worst, if you can believe it. 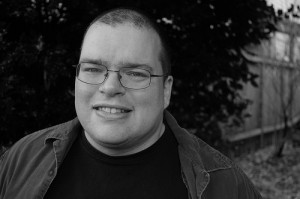 When you’ve taken more than 600 photos and hated them all, then said “Fuck it. I’m done.” That’s when you get one almost-acceptable one