Last night Twitter (and the rest of the internet) had a bit of a freak-out about Ben Affleck being cast as Batman in the new Man of Steel movie. Most of them were all: “Have we watched Daredevil and died in vain?”

But hey, remember when this guy was cast as Batman?

Good times, good times. Everyone thought he would be completely wrong for the part, and you know what? He was!

But it wasn’t his fault. Tim Burton made a Batman movie but he didn’t actually like Batman. 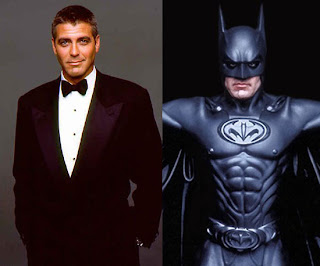 Head quirks aside, George Clooney was a terrific Batman, but his movie was even more ridiculous and off-putting than Keaton’s. There’s a case to be made for calling it a camp classic, I guess, but it didn’t do much for the franchise and it certainly didn’t help Clooney.

But what about Batman Begins? That was a great Batman, right? Hey, did you know how hard it is to find a picture of Bale in the mask with his mouth open? I think this is why:

Look at that damn tongue. When he’s playing other roles, t’s not such a big deal that Bale talks with his whole freaking tongue right at the front of his mouth, but the Batman mask focuses people’s attention on the actor’s mouth because that’s the only human part showing. It was the most distracting thing about the movie, even beyond the voice.

But you know what? It was still a good performance. Even better, it was a pretty good movie with a pair of good/pretty good sequels.

And now the terrible Affleck Daredevil is the cause of a lot of shirt-tearing. Well, I’m going to come out and say it: The problem with Daredevil was the movie itself, not the performance. Affleck’s name is the one everyone knows, but he wasn’t to blame for that script (with Murdock kung fu fighting in his civvies to flirt with Elektra) or the ridiculous cgi and sound effects. There were several scenes that worked, and part of the reason they worked was Affleck’s performance (I’m thinking about the aftermath of the fight in the bar specifically).

I wanted to drop in a clip of the more egregious fake effects here, but Fox is careful about yanking its IP off YouTube.

So Affleck’s performance as Batman will be well-received in large part depending on how the script is written, how the scenes are shot, and a thousand other factors. Batman movies have reached the point of being franchises, like James Bond; it’s no longer enough for most of the audience to say “Batman movie!” and get people to line up. You need to make an actually decent movie. Like Clooney, Affleck will be remembered by the quality of the film he’s in.

Did I mention it’s being directed by Zach Snyder?