Who has asked me to chime in on the DC comics movies? Exactly no one, but it sometimes helps my creative process to talk about what other people ought to do, so here is the slate of movies DC should put into production, along with a little talk about why.

First: there are three ways to measure a comic book character: By how iconic they are, how powerful they are, and how much spandex they have.

Iconic is pretty obvious, I think. Does the general public, the folks who haven’t picked up a comic book since they were eight, recognize the character on sight? That’s a good thing, because you’re not going to make a successful movie if the only people who see it are comics nerds. If you’re going with a character who is not iconic, you’re going to need them to be intriguing at first glance (in the trailer).

Powerful is equally obvious. Superman is obviously the most powerful there is, but the more power they have, the bigger the threats need to be and the more removed it becomes from the casual moviegoer. Batman escaping from prison to deal with a nuke is a nice, low-level James-Bond type plot. Audiences connect better with that sort of story than “It will destroy the world!” type things.

Spandexy might not be terribly obvious, but I think it’s pretty clear. The more you show a superpowered person in comic book clothing, the harder it will be to sell that to general audiences. An iconic character counteracts this, because general audiences only recognize them by their duds, but for characters they haven’t heard of, a goofy spandex suit works against them. So, no one wants a Superman without his red and blues, but Animal Man can GTFO.

Marvel got around this by introducing a bunch of heroes without their spandex. Yeah, Spider-man wore them, but everyone recognizes Spider-man, but the X-Men got stuck into black leathers (because no one cares about Wolverine’s brown and yellow and Cyclop’s yellow trucks are laughable), the Hulk just wears purple pants, and Iron Man is wearing high-tech armor (painted like a sports car). The Iron Man thing worked really well, because he looks so much like spandex in the comics but in the movies he’s very much not. As for Captain America, his comic book suit was an object of derision in the movie.

So, I’m going to say that DC needs to go with some characters who are Iconic and some not, but the Iconic ones are the only ones we get spandex.

Okay, start with the obvious:

Wonder Woman: Hey, Marvel is making hits with a space viking with a magic hammer and a Ren Faire speaking style. It’s ridiculous that anything thinks WW would be hard to do. In fact, I’ve already begun a post in which I write out my WW movie pitch, just to demonstrate it can be done. I’d have posted it already but frankly I can’t spare the time for it. It’s too much fun (like this post) and I never have enough time.

Anyway, I’ve heard a lot of people talk about WW as though her appeal is inexplicable and it’s taken me a while to realize it’s the spandex. I mean, come on: 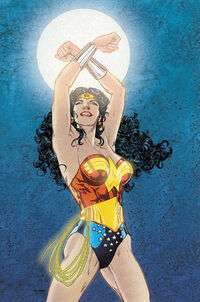 That doesn’t even work in comics. So. Work up a new suit, ditching the things that won’t work, like Thor’s winged helmet. Add a suit of armor with gold stars or whatever to acknowledge the classic suit. Instead of making them long-lived aliens, they’re warriors from another dimension. Tie it in to the Phantom Zone, but call it “Olympus”. The “old gods” like Ares and Poseidon want back in, and WW has to team up with modern soldiers, both men and women, to stop them and the traitor Amazons helping them.

It should be the sort of PG film that adults and kids would both enjoy. WW is a superhero and a princess, so even though the movie needs to be thrilling, it has to be something you can take young girls to see.

The other iconic character they need is Catwoman. I know they tried this ten years ago, but that was an avalanche of bad ideas (or so I’ve heard–I don’t watch truly terrible movies on purpose). Instead, make Catwoman what she is: a high-end thief specializing is outrageous heists. It’s a caper movie.

However, you still need to pit Catwoman against a villain, some kind of scary creep with a terrible plan that will hurt people close to her. The climax shows her using all her skills to right wrongs (and make a little green in the process).

So, Catwoman is iconic, non-powerful, and spandexy (but not too spandexy).

After that, DC doesn’t really have any iconic characters. Superman, Wonder Woman, Batman (and all the “Bat Family”, which is a godawful name) and that’s it. I’m not sure anyone really wants a Batgirl movie; as much as I love the character and the way Gail Simone is writing her, I can’t see her carrying a movie. As for Flash and Green Lantern, those guys are only vaguely famous.

So, once we’re out of the iconic characters, I think DC should start with Cyborg. I realize that he’s going to guest in Superman vs Batman (as is Wonder Woman) but he has the Iron Man thing going for him: his “superpowers” can be written off as excellent tech, and his spandex is just his metallic body. 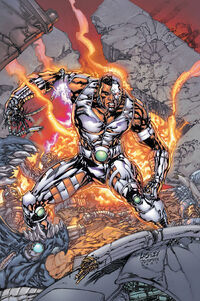 For those who don’t know, Cyborg is Victor Stone, a star athlete who could never impress his scientist father. After a horrifying accident, Daddy Stone brings his son to the lab and rebuilds him with the cybernetic equipment he’s been working on. Suddenly Victor is more powerful than ever, but he’ll never play sports again.

To avoid a spandexy antagonist, do what the Marvel movies did with Iron Man, Hulk, and Cap–make the villain a larger, tougher version of the hero. Maybe the company Daddy Stone works at was planning to build a cyborg soldier with mark 2 gear, and Victor is called on to stop him at the end. And of course the hero wins not through his gear or his physicality, but because playing sports taught him to work with others in a team.

So, he’s not iconic, only semi-powerful, and not spandexy at all.

Next up I suggest Starling: This might seem like an odd choice, but DC needs a non-iconic, non-powerful, non-spandexy talented normal to put their universe through the paces. Starling is a freelance spy type, with a lot of skills with guns, plenty of contacts around the world, and a straightforward style.

Plus, she looks like she lives in the modern world: 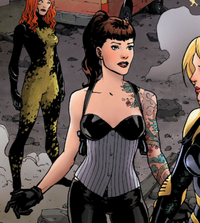 She could fill the role The Punisher plays in the Marvel movies, except she’s not totally grim and pooh-faced. In fact, she’s funny. (Apparently, in the comics she’s betrayed her teammates, but I like to pretend that shit never happened.) Giver her a Jason Bourne-type story but in a world with superpowered assholes, and I’d be all over that.

Finally, for a non-iconic, non-spandexy, but powerful character, I suggest Raven. The people who recognize her will know her from the Teen Titans cartoon of years ago, and there’s a lot to do with a character like her. She flees to Earth from Super Devil type father in an adjacent dimension (see above re: Phantom Zone and Olympus) and her powers are hard for her to control. When she lets her emotions go, her darkness-based telekinesis can be incredibly destructive.

Her movie becomes the story of a repressed and damaged young girl who finds self control in a circle of friends who are outcasts like her. Plus, she stops an invasion of monsters almost single-handed. This way, she gets to have the Big Event climax that a powerful character deserves and also fragile relationships she needs to protect.

Finally, The Falcon looked so cool in the second Captain America movie that I can’t help but suggest Hawkwoman. Go with the alien cop version who comes to Earth hunting master criminals, and give her the wings, the Nth metal weapon (that can be a gun or a mace or whatever she needs) and let her have it out.

If you want to go with Hawkgirl instead, you can have Hawkwoman’s daughter stow away on her mother’s ship, not realizing that this is a dangerous mission. When the bad guys kill mom, the daughter gathers up her gear and goes after them.

And that’s it. Yeah, it’s heavy on women, but DC–and Hollywood in general–need to turn that shit around. Plus, they’re already turning a bunch of their characters loose on TV. Again.

But if Marvel can turn Blade (non-iconic, non-powerful, non-spandexy) into a successful mini-franchise, DC should be looking to tap its bench, too.