Over a week ago (was it really that long?) I has a Twitter exchange with author Sam Sykes. (Longish rant after the cut)

Here's a Drizzt novel cover. Give me your opinion on it. pic.twitter.com/67g0ITlAFy

@SamSykesSwears Because it's deeply dorky, with the triple-faced skull and all. Deeply. Dorky.

@byharryconnolly Thinking the vast amount of readers are probably at peace with being dorks.

.@byharryconnolly I mean, there's stuff to be ashamed of in fantasy, but it's not thinking sword fights with three headed liches are cool.

@SamSykesSwears My responses to this sort of thing are complicated and difficult to explain in Twitter. @ChuckWendig

@andrhia @ChuckWendig @SamSykesSwears I do like what I like, though. That art focuses on the shallow, surface part.

@byharryconnolly @andrhia @ChuckWendig How deep are you going to get in cover art? Why can't we have both?

@SamSykesSwears @andrhia @ChuckWendig Don't start talking that way. I'm not saying anything should be taken away from you.

There were more responses than this, which you can read if you click the timestamp on that first tweet.

Anyway, seeing that exchange, you might forgive me for thinking this blog post somehow relates to that exchange. Please do give that a read.

First thing: there’s a lot to be said about Drizzt D’Urden and little of it is good. He’s the only good guy from a race of evil elves… who all have dark skin. That’s all been hashed over by people who know more about the subject than I do. Yeah, I read a Drizzt trilogy once, but that’s a story for another post. The character is peripheral to the topic I want to discuss.

Second thing: I don’t know Sam Sykes except via Twitter. He seems like a nice guy and he must be a talented writer to sell a novel at 25. When I was 25 I was so fucked up that I was pretty much trying to destroy myself in the most lonely, tedious ways I could imagine. There isn’t even a good memoir in it. At the same age, he’s a pro. So kudos for him.

Third thing, let’s try to address some of what’s in that post. Basically, Sam is saying that Drizzt and the goofy tropes of fantasy–three-headed liches, panther animal companions, glowing weapons–are totes fun and nothing to be ashamed of.

Unfortunately, he’s mixing up a lot of things he shouldn’t be. Look at this:

And if you pay at all attention, it almost always links back to the desperation to be accepted by that successful and respected older sibling: mainstream literature.

A conclusion that comes out of where, exactly? Why even bring up “desperation to be accepted by… mainstream literature” except as a reflexive defense? I mean, we’re well out of high school now, so are mainstream literary types supposed to be our jocks now?

Me, I’m a year and a half from 50, and I have no one in my life mocking me for my tastes in reading. Not the bookstore owners, not my friends, not their friends, not librarians. No one. Plenty of people express their disinterest, but never in terms that they think I should seek their approval and I have no idea why I would want to anyway. What do they have to do with my life?

In other words, the usual geek pride spiel. I’m not as hard on the whole geek pride thing as Nick Mamatas is, but I can’t say I’m moved to hear that fans find it “squee-worthy” that people share similar tastes in art, whether it’s high art, pop art, corporate art, whatever. To me, there’s nothing particularly special about it.

There’s an important disconnect in the argument he makes: My problem isn’t with the character or the book. Whatever’s in the book, good or bad (I haven’t read it) is beside the point. 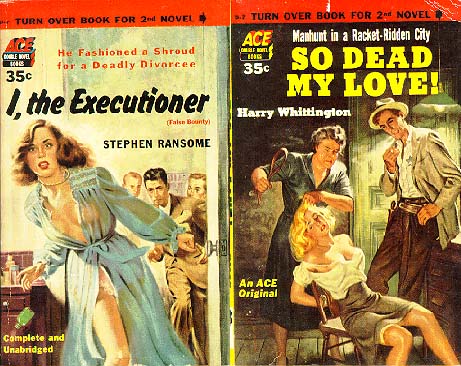 All three of those books feature crime and sex, but how are they advertized? The first two (part of a double, as it says on the cover) show helpless/terrified women with lots of skin showing, and men pursuing/in charge. Bonus sneering older woman with a whip.

Whatever you think of the cover of THE POSTMAN ALWAYS RINGS TWICE, the one thing it isn’t is lurid. It’s not about power fantasy, which the other two are.

Look, most fiction is one kind of wish fulfillment or another. Power fantasies are everywhere, including the bookshelf beside me. I still read Batman comics sometimes. My original Twitter bio was “I write books about monsters and face-punching.” Wish-fulfillment is at the center of most kinds of fiction. So is fun of one kind or another.

But the advertising matters too, because it’s the cover that promises lurid, uncritical wish fulfillment or something more.

Let’s talk briefly about the difference between the text and the image on the front. Want to read about a sword fight with a three-headed lich? Great! Sounds awesome. In a fantasy novel you might have 80K – 250K words to set that up, and you can describe it how you like. (Christ, I just realized that cover has a Roman numeral 4 on it.) You can have names for each of those three faces, maybe. Histories, personalities, etc. You can make them characters. Maybe they’re funny or tragic. Maybe they had agency once, or struggle to regain it. In other words, maybe there’s a human context here.

But when you turn a character like that into a cover image, you run into the problems that visual representations give, especially cover art. What context does that lich have except the image itself, the author’s name, the title of the book, and maybe the section of the bookstore where you found it?

What we’re left with is the lurid appeal of a thing without a human context we can relate to. Take those cheap pulp covers: Maybe I, The Executioner has an appeal beyond the promise of the fleeing, underdressed woman with fear in her eyes, maybe not. All the cover promises is the gut-level thrill without anything more.

Covers are advertising (Interesting discussion on the subject, with an eye to picking one style over another) and what you highlight in the cover (and what you elide) provides clues to the focus and meaning of the story. It’s like a movie trailer: if your trailer only shows fight scenes or action sequences, audiences will quite reasonably expect that’s all there will be. That’s why they include the context: a love story, big stakes, people the hero cares about in danger.

Obviously, you can’t necessarily put as much information in a movie trailer into a single cover image–even a movie one sheet has more space for additional elements. But there are ways to place an emphasis that doesn’t highlight the lurid.

For example (direct links added for people who can’t see the covers):

I post these because I haven’t read the books so I don’t know anything about them except for what’s on the cover, but they feature fighting characters without showing who or what they’re fighting. The focus here is on the protagonists and their willingness to do battle in the face of danger. That’s the red meat of fantasy.

Also, those covers are a bit like a sentence constructed in the passive voice: “The victim was murdered in the park.” Writing it that way moves the focus away from the killer. It puts the victim at the forefront, which is sometimes the best choice. With a cover, a warrior without an opponent puts the focus on the hero’s qualities.

Obviously, there’s more to cover choices than this and there’s a lot I don’t know. Tastes change, subgenres have a certain styles designed to catch the attention of casual browsers, and sometimes there’s just no budget for a better cover. The “covers are advertising” link above talks about it in more detail.

Still, I talked about frozen pizza in my tweet exchange above and I think that analogy holds pretty well. A lurid cover promises cheap entertainment that is quickly consumed and is best if it’s forgotten just as quickly. It may also be so tasty it’s hard to resist; that’s the point of a lurid cover, right? To target a narrow demographic by promising a lowest common denominator thrill, without anything like deeper meaning?

Hey, maybe there’s deeper meaning there anyway. Maybe it’s shallow entertainment that readers can spackle over with meaning they find themselves. But the ad doesn’t promise that, which is why I am embarrassed by the appeal it has for me.