One Man has been on sale for nearly two months, and while sales have not been life-changing, they’ve been holding fairly steady. And that’s mainly because of the reviews.

The reviews so far have been very positive, with a number of people saying One Man was the best fantasy they read all year. To which I have to say:

I spent two years on this book. I’m not what you’d call prolific, and I thought it might be wise to stop trying to be. What if, I thought, I stopped streamlining and started dawdling. What if I gave it extra time and attention to make something complex? What if?

Well, publishers said Meh, which has me thinking that what I want to see in a second-world fantasy is not exactly in the mainstream. (Like all my other books, I guess.) But still! There’s space outside the mainstream if I can connect what I love to the readers who would also love it.

Which is why I’m so grateful for the reviews you guys leave, and why I keep asking for them. Last week, One Man passed the fifty review mark over on Amazon, which is a huge boost to discoverability. Amazon likes to prioritize books that get a lot of reviews, and I’m hopeful that One Man will pass the next level for Amazon’s algorithms, which is 100 reviews. Child of Fire has over a hundred, and so does The Way into Chaos.

However, Game of Cages, Circle of Enemies, and several other works of mine have not, so I have to keep coming here to talk about this and ask you to drop a review if you haven’t already.

Amazon makes that easy. When I enter the book title “One Man” into their search function, the results actually include books with that title. It puts them at the top, even.

It’s different for Goodreads, though. Goodreads’s search algorithm seems like it assumes you don’t actually know the title of the book you’re searching for, and throws up a lot of weird results. For example, when I type “One Man” into a search window, the auto-complete looks like this:

What you get before you press enter

I get that Camus is more popular than I am, but are they really putting in a book that I didn’t search for instead of one that I did?

What happens, you may wonder, after I press ENTER to see the results? 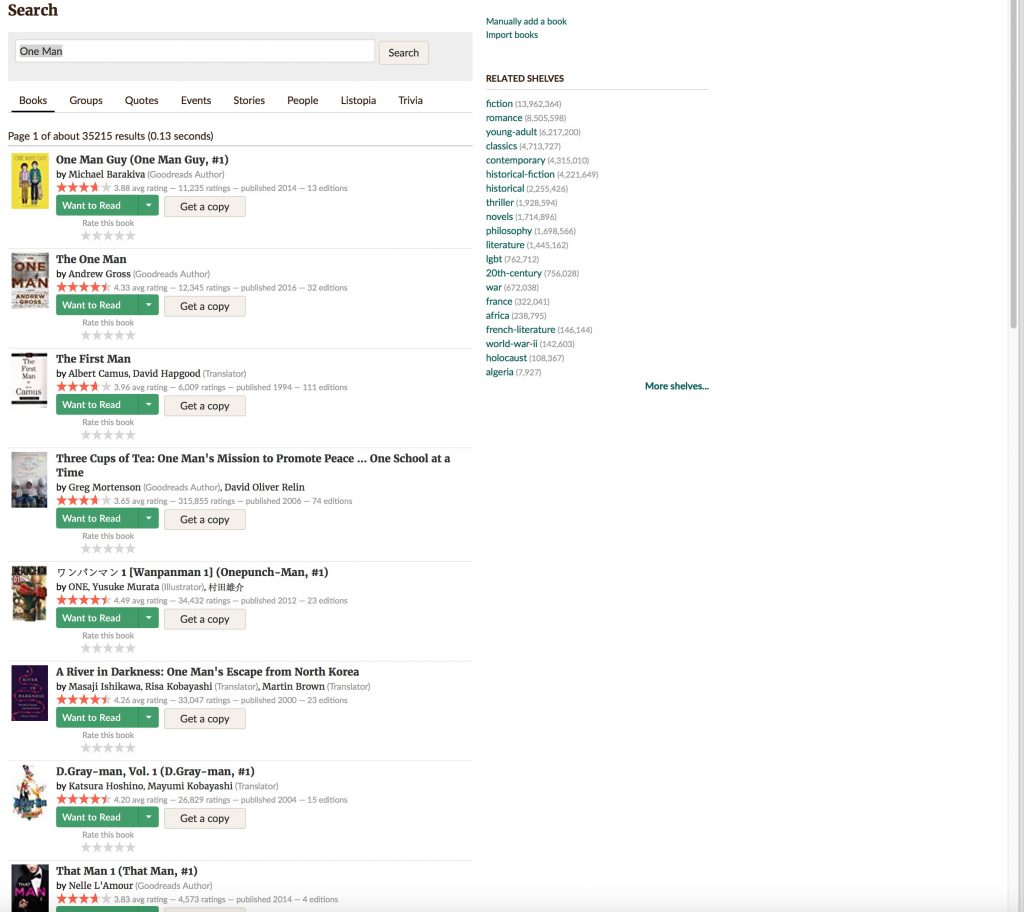 It’s like they’re ignoring the title I actually entered.

The reason I bring this up is that some folks have said they had trouble finding the book on Goodreads, especially when it first came out. You’ll have to throw my name in there to actually find the right page, at least until Amazon brings the search algorithms on Goodreads up to the standards of their online store. Or click this link.

And thank you again for the reviews you have already written. I’m incredibly grateful.

By the way, if you want a direct link to an online vendor to drop a review, see below: