When I dragged my kid to the castle in Tomar, I said: When are we going to get another chance to see a castle?

Well, derr on me, there’s a castle right within Lisboa city limits. Of course there is. My wife’s Italian friends are historians, so we thought it would be educational to see a castle with them.

But first! A church. Churches and castles, man. That’s what Europe’s all about.

The church was actually the Lisboa Cathedral, and it was cooler than the castle, but only once you paid to see the treasury and the cloisters. The paid parts contained an archaeological dig that revealed Roman roads and sewers, Moorish homes, and a bunch of Christian sepulchers. Have some pics below.

The castle was pretty crowded, as you’d expect, and it was full of money-making opportunities for the city. There was a fee to enter and lots of opportunities to buy souvenirs and espresso. It was still pretty cool, but a little Disney-fied.

By then my feet were hurting like whoa, because the public transportation to those sites is packed. We stopped for lunch at a little restaurant, where the waiter talked us out of the meal we wanted to order into the house special. It turned out to be, once again, meat w/ two carbs, no veg. I’m pretty much over Portuguese food. 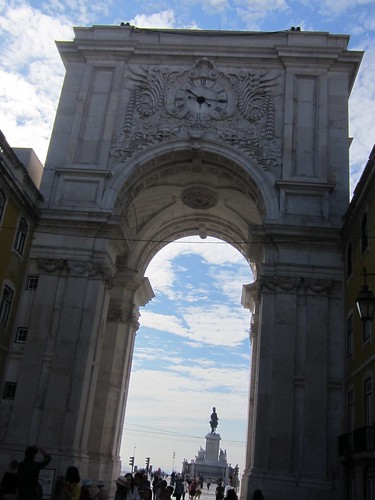