Yesterday, Marvel announced their upcoming Phase 3 movies, and the earliest new character is going to be Dr. Strange. They’ve even announced that they offered the role to Benedict Cumberbatch.

For those who aren’t familiar with the character, he’s basically the superhero wizard of the Marvel Universe. Origin in brief: Arrogant surgeon injures his hands in car accident. In seeking a cure so he can go back to being his old self, he stumbles upon a world of magic spells, extra-dimensional demons, and fetishized orientalism. He becomes apprenticed to a sorcerer, then takes the role of the Sorcerer Supreme (the magical protector of his reality).

Basically, he faces magical bad guys, extradimensional weirdness, and fights with magic items and spells. And back in the Steve Ditko days, we got art like this: 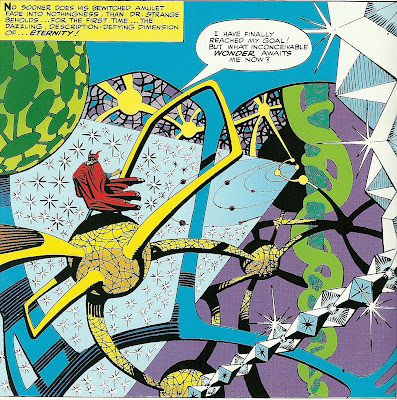 Note to Disney: get that shit in the movies.

However, it seems that the MCU will continue to run away from the idea of actual magic. In the upcoming movie, Strange’s spells let him “tap into the supernatural, which involves everything from quantum mechanics to string theory, all of which you can manipulate with your hands and your thoughts.” Which makes no sense, really, but if you’re afraid of driving off any segment of your audience, you change Thor into an alien (and turn his story lines into sword and planet adventures) and base Dr. Strange’s spells on “string theory.”

Which… whatever. It’s just a different kind of hand-waving, and I seriously doubt it will satisfy hardcore “Harry Potter recruits for Satan!” types. The truth is, I’m hoping this movie works. Dr. Strange has always been better in the concept than the execution–although I wish Marvel would hire Chris Bird to write the book. His ideas are more interesting than the usual stuff Marvel runs with.

How I think it should be done:

Skip the origin. Just to show it’s possible.
At least three Ditko-esque acid trip landscapes.
Keep Cleo, but without the creepy student/teacher romance.
Keep Wong, but make him more than a kung fu manservant. Better roles for POC > fewer
Lose the costume.
Get a better costume. The big cape is cool, but change the look.
Keep magic spells
Lose rhymes required to chant them.
Lose the magician swears. “By the Vishanti!” Seriously.

Villain: Mordo, with Dormammu lurking in the background.

As for the casting of Cumberbatch (if they’re correct) I don’t really have an opinion about him. I’ve seen him on Sherlock and Star Trek, and was underwhelmed both times. Maybe his performance in THE IMITATION GAME will surprise me, since I thought ST was boring and wanted to walk out of the room when Sherlock was on. We’ll see.