I have already described the origin of The Flood Circle in my post about The Iron Gate. Kickstarter. Backers. Fulfillment. Novel. A few people have expressed surprise that I am releasing another book so soon after the previous one. Well, I wrote both together, sort of. First draft and revision for The Iron Gate. First draft and revision for this one. Second revision then second revision. Beta read and then beta read, and so on. The real question is why has the delay between books been so long?

But when I sat down to work out the story, I had to ask myself: Is this the last Twenty Palaces novel?

I could have cut things short. Definitely. I could have tried to arrange the story so that the finale of this book was the midpoint of another, very different book. Then I could have wrapped everything up in a single novel.

It was tempting. I recently discovered that I am not, in fact, growing younger as the years go by. In addition, I like a fast-moving story. Why not put Ray and Annalise through the ringer? Why not… I don’t know… turn my final idea for a novel into a ten thousand word epilogue or something?

It wouldn’t work, though. There was still too much story to tell. There was too much I wanted to get done, and the danger of rushing a story is that it loses its emotional impact.

So there’s going to be one more book after this one, called Twenty-One Palaces. I know the general setting but I have zero plot beats figured out. The stakes, the tone, the supporting cast are all a mystery.

But that’s for the future. For now: The Flood Circle 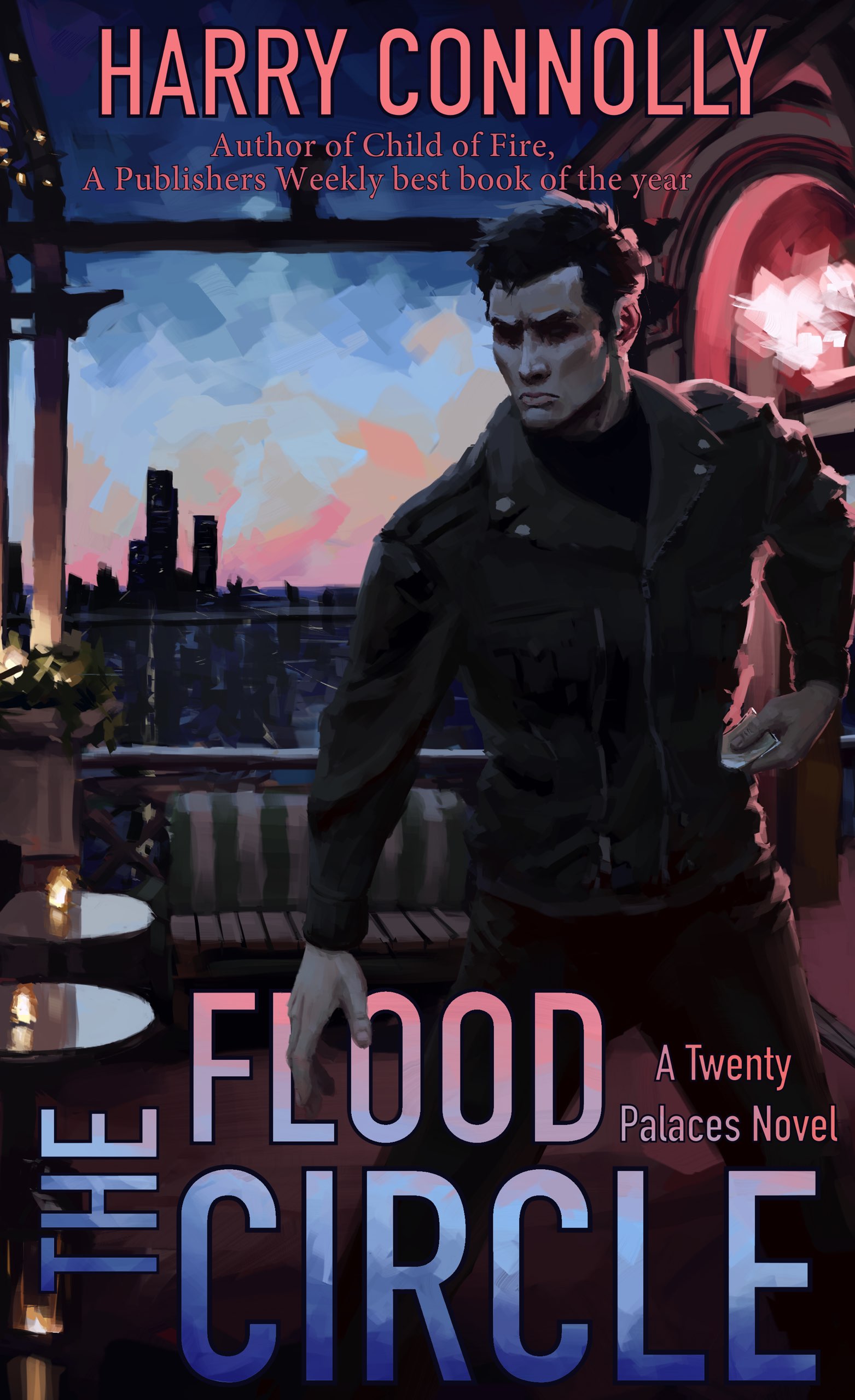 The three original spellbooks, source of all magic in the world, have been found, and Ray Lilly has already “acquired” one. Now he and Annalise are on a historic mission to get the other two and they’re ready to kill anyone who gets in their way.

If they succeed, the Twenty Palace Society will become more powerful than it has ever been and could truly safeguard humanity from both extra-dimensional predators and the people who summon them.

But this time their enemies are more formidable than any they’ve ever faced before. What starts as a covert mission to hunt sorcerers quickly collapses into a desperate—and very public—struggle to survive. Can Ray and Annalise track down and kill these sorcerers before they execute a plan to drive the human race to the edge of extinction?

As usual, I’ll be turning the buy links below into actual links as the book appears on each site.

Tantor is still doing the audiobooks, and they’re planning to keep the narrator from previous editions of Twenty Palaces. I’ll add those links as they appear.

You may have noticed fewer options for a print copy this time around. Normally, I set up a print version within Amazon and through Lightning Source’s Ingram Spark system. Ingram’s distribution system is very wide, allowing you to walk into pretty much any bookstore in the English-speaking world and say “Can you order a copy of The Flood Circle for me?”

It also gave readers a lot of choices (for print) that were not Amazon. Bookshop.org and Indiebound both explicitly support independent bookstores. And while the markup at those two shops can be intense, supporting indie stores is a worthwhile goal.

Except it mostly never happens. My most recent bestselling book through LSIS has been Twenty Palaces, and that book sold only twenty copies. Over two years.

What’s more, LSIS wanted to charge me eighty dollars to put the book up for sale.

The POD print editions are already too expensive for readers, and the system is too expensive for me. It’s weird to think of a $80 fee as a negative advance that I’ll never recoup, but I’m sitting here facing facts and accepting it for what it is.

I’m also thinking that they set the price that high to discourage long-tail idiots like myself, and I’m a guy who can take a hint.

So this time around, the only print options will be Amazon and B&N. Sorry about that.

And please, if you like my books, please tell your friends. In person, on social media, posting a review somewhere. Anything. Please spread the word.