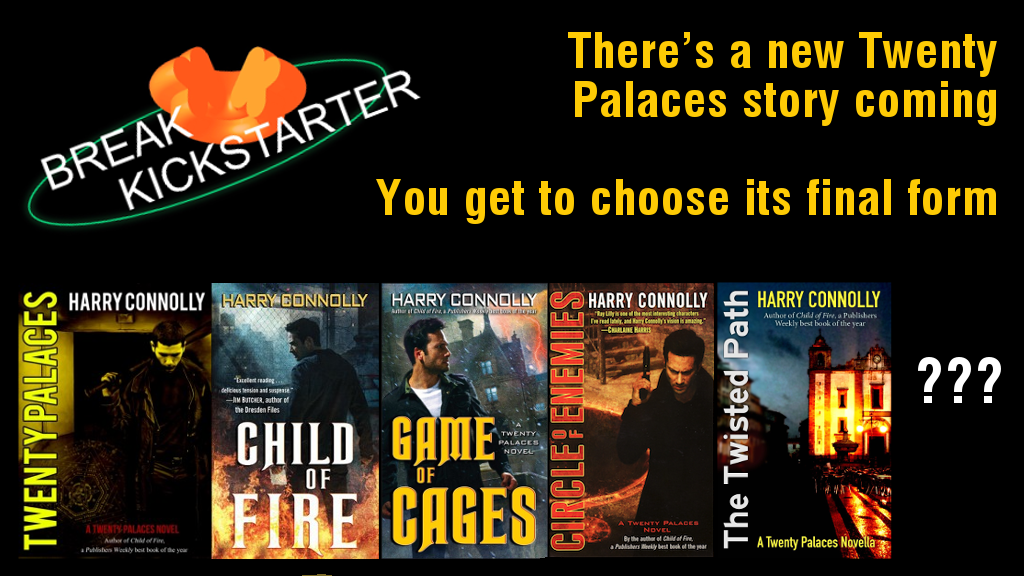 Kickstarter is running a “Break Kickstarter” campaign, which invites creators to use the platform in unusual ways. Not to break their rules, but to organize a campaign in an unusual way.

Until I saw that promo, I hadn’t been planning to use Kickstarter again. To be honest, I was gratified that my 2013 campaign for The Great Way did so well, but it was a crapton of work, and I’m a naturally disorganized person. I screwed up a few times while fulfilling that campaign, and that was extremely embarrassing. I didn’t want to put myself into that position again.

But if there’s an opportunity to flout the usual expectations? I’m signing on for the next Twenty Palaces story, The Iron Gate.

Here’s what’s going to be unusual in this campaign:

No video
No stretch goals
One reward: an ebook (although you could decide not to take a reward if you prefer)
One pledge level: (although KS lets you pledge more if you want)
You decide how long The Iron Gate is going to be

The Twisted Path was a novella, and some readers really wanted me to go back to novels. I’m not sure how much demand there is for this, but let’s find out.

For every $50 pledged to this campaign, I will write a thousand words. That’s the minimum professional rate, established by SFWA, of five cents a word.

In practical terms, I’ll look at that as a minimum word count.

So, if the campaign meets its goal of $500, I’ll write a 10,000-word novelette, which is about the length of “The Home-Made Mask”. If all twelve-hundred-ish people from the Great Way campaign pledge $4, that’ll be about enough for a novel.

I’ve set an upper limit, too. If you want to know what that is, or have other concerns, please check out the campaign. Also, if you’d like to take part.