“One Man is a superbly realised story set in a rich and fascinating world. The horror grips, the fantasy delights and the characters remain vivid and real to the end.” — Justina Robson

It’s been four years since I released a new novel.

Four plus, actually, and I’m a little embarrassed that it’s been that long. There was the Twenty Palaces novella, The Twisted Path, of course, but still. Four years.

This book is the reason.

I spent two years writing One Man. It’s is a big book, over 150,000 words. It’s complicated, with lots of POV characters and locations. The setting is limited–almost every chapter takes place in a single city–but it’s complex.

Which is another way of saying that a lot of time and sweat went into this novel, and I’m proud of the result.

Here’s the back cover description:

As a child, Kyrioc was groomed to be the head of one of the most powerful noble families in Koh-Salash, a city built inside the skeletons of two murdered gods. Kyrioc himself dreamed of becoming head of the High Watch, the highest political position in the land.

Those dreams have turned to dust.

Presumed dead after a disastrous overseas quest, Kyrioc now lives in a downcity slum under a false name, hiding behind the bars of a pawnshop window. Riliska, a nine-year-old pickpocket who sells stolen trinkets to his shop, is the closest thing he has to a friend.

When a criminal gang kills Riliska’s mother and kidnaps the little girl, Kyrioc goes hunting for her.

In a raging city on the verge of civil war, Kyrioc only wants to save his friend. He will risk anything for her, even awakening the powers that murdered the gods so long ago.

See, I wanted to try an experiment. Most fantasy novels have huge stakes: A Dark Lord trying to conquer all. A usurper seizing the throne, pushing a kingdom toward civil war. A world-shattering magical cataclysm. Invasion of monsters. Return of monsters. Whatever.

But what if I wanted to create a fantasy story about a quest for something small. Something important, but not world-shattering. For instance: the life of a single little girl. Not even his own, just someone he knows.

I wanted to see if I could make a story like that as compelling as one where millions of lives were at stake. The consequences of the protagonist’s actions were wide-ranging. They had ripple effects. The other POV characters have their own quests, and as the status quo of the city crumbles, the dangers escalate.

But for the protagonist? He just wants to save one life.

If I’m being honest with myself, I felt sure that NY publishers would really respond to this novel. I expected the mix of genres, characters, and setting to hit the bullseye. Probably, you could say that I was being ambitious.

I was wrong. One Man was on submission for over a year and a half and, while it earned me the nicest rejection I have ever seen (or even heard about) no one wanted to publish it.

It’s probably a mistake to admit that, but fuck it. I think it’s a good book. A thriller with strange magic, desperation, betrayal, and murder. But it’s an odd book, too, with bourgeois hobbit vampires, and sleeping giants whose flesh can heal you, and a sprawling city built inside the skeletons of two gods who were murdered while fucking.

What I’m hoping, if you’ve read this far down the page, is that you’re interested in a big, odd, ambitious book about crime and magic and a screwed-up guy who has one last chance to do something decent in this world. 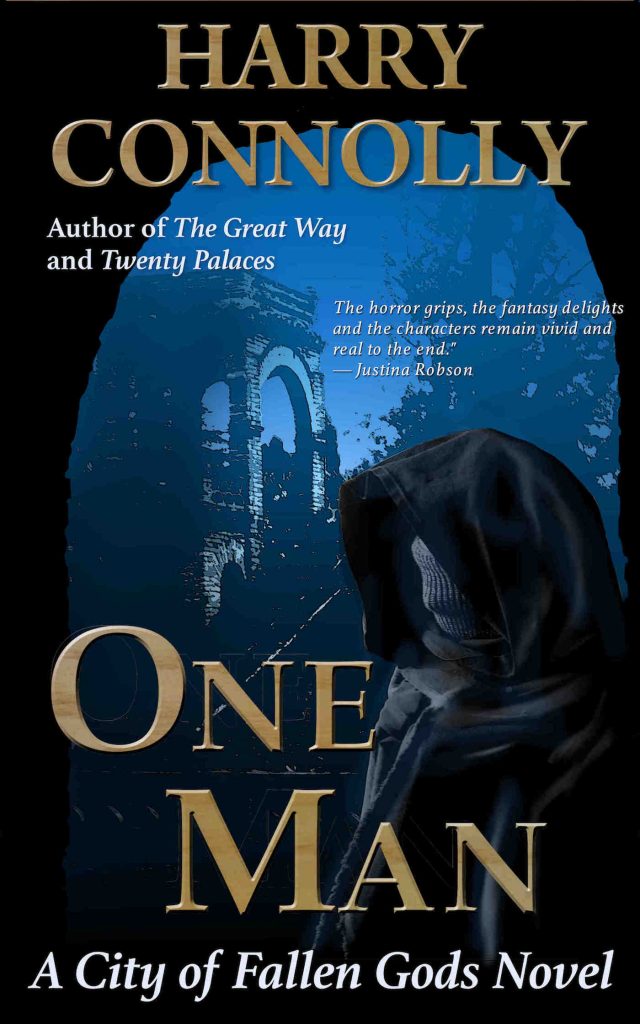 The trade paperback should be available to order from Ingram, if you want to buy from your local bookstore, but obviously you could also buy from one of the online vendors below.