I debated writing about this, but what the hell. Here goes.

We don’t have very much money. This isn’t a lament or an accusation, just a fact. My family lives without a lot of the things that other people have (car, home, cell phones, cable TV, etc) and that’s largely a conscious choice. We homeschool. We write and paint. We are at home a lot and together, eating meals at the table and spending time together, not eating in our car as we drive from one thing to another.

Still, even though these are the choices we’ve made, sometimes they’re still tough. Very tough. Case in point: grocery shopping. For the last six or seven years, we have pulled a child’s red wagon the eight blocks or so from our apartment to the supermarket, locked it to a bike rack, shopped, then put the bags in the wagon and pulled it home.

It’s not an activity that ever made me feel like an up-and-comer, let me tell you. Worse was when the cheap plastic tread on the wheels split and fell apart, leaving the wagon to rattle on its white “rims”.

So when my wife announced that she was going to take over the shopping, I was glad and embarrassed. If I were more successful, we’d have more fun money for a car or something.[1]

And I started to learn about the staff at the supermarket. I’m not really one for talking to strangers, but she’s an extrovert and will talk to just about anyone willing chat back. So I heard about the staff and what they’re doing, and I had a few conversations with them when I’d stop in for something quick. “Where’s your wife? Tell her this tell her that tell her I said hello.” She even told them about my new book, something I would have never done.

What I’m saying is, she’s the nicest person I’ve ever known, and she’s very comfortable connecting with people.

To get to the point of this story, when she was shopping on Christmas Eve, the supermarket staff were unusually attentive, checking in with her and asking if she was ready to check out. When she went to check out, she was doing her usual thing, facing the register and chatting while she sorted the food. 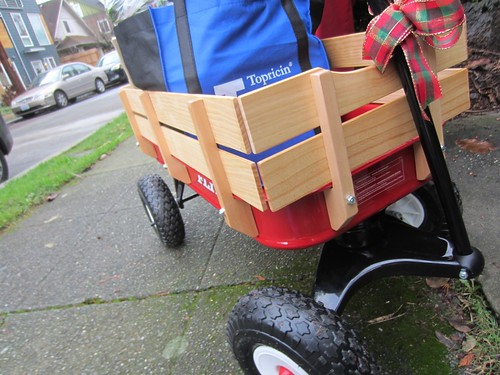 And assembled it, too.

It really meant a lot to her, that gesture of kindness from people who had no reason to offer it except that it was Christmas and they wanted to make her happy. And they did.

It’s been a subdued holiday season with a few big distractions[2] but this was a moment that really made things special.

[1] Yeah, I know about Uber, Flexcar, and the rest. I’m not looking for advice on how we could spend our money better.