Back in 2012, Fred Hicks, the big wig over at Evil Hat game company (and I can’t type “Evil Hat” without adding an “e” to the end), and Chuck Wendig, author and editor, invited me to write for an anthology based on one of EH’s games. The game was called Don’t Rest Your Head, and it was an rpg about insomniacs who suddenly find themselves trapped in Mad City, a nightmarish dreamscape full of evil shit that wants to eat you. Plus side: the characters also get lucid-dreaming-like powers, and the whole thing is very weird and cool.

The story I wrote, called “Don’t Chew Your Food” was reprinted in my short fiction collection, but there are a whole bunch of terrific writers in the table of contents: Mur Lafferty, CE Murphy, Laura Anne Gilman, Stephen Blackmoore, and more. Check it out, seriously.

Which brings us to today. Evil Hat is putting out a “Don’t Rest Your Head” card-building game, and a creature that I invented, the Shameful, is on one of the cards. (!!!)

Image behind the cut. 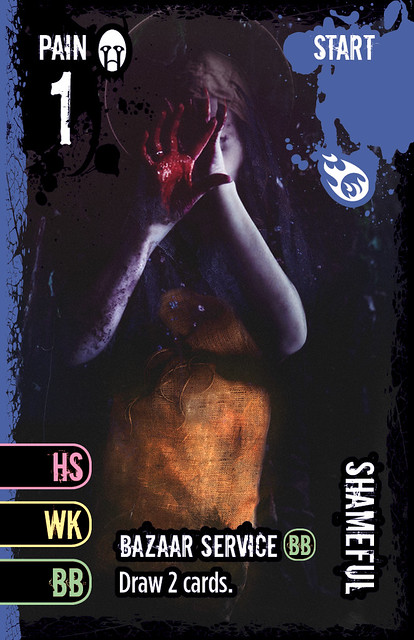 Very cool. I have never had something I created turn up in a game this way (that I know of, anyway).