Hey, check out what arrived in the mail: 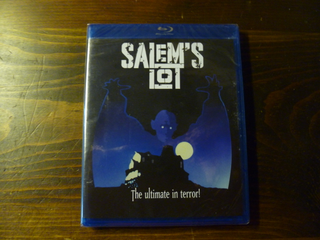 Last month I had a hankering to watch this, but it wasn’t available on the streaming services I pay for (and I try not to spend money renting tv shows or films on streaming, because budget). Luckily, Netflix had the dvd.

And it was terrific. Better, in fact, than I remember. Bonnie Bedelia has this incredible presence without ever raising her voice, and James Mason is always a great villain. Sure, it’s got that 70’s trumpet-blare-freeze-frame-zoom-in “scare” technique, but I love that shit.

But when I decided I wanted to have it so I could watch it whenever I please (aka this coming Halloween), I bought a physical copy. Sure, it would have been easy to buy it on iTunes, but hey, there are some downsides to that.

Read here the tale of the guy who had movies he’d previously purchased suddenly disappear from his account.

For those who don’t want to click, the Reader’s Digest version: iTunes had an agreement to sell movies put out by a certain distributor. Later, for whatever reason, that agreement ended and the distributor pulled the movies from iTunes’s store.

Which is when iTunes began deleting the movies from its customers’ libraries. It didn’t matter if you paid them to “buy” the film, because the film isn’t yours. It’s theirs. They can take it away from you at any time.

If I were to guess, I’m sure they set up their program this way to put pressure on the distributors they deal with. The head honchos at iTunes know that pulling a film from a fan’s library pisses them off in a big way, and they can instruct their CSRs to throw up their hands and blame the distributors. But really, it’s a fine reason to bypass iTunes all together, at least if you’re planning to purchase films or TV (iTunes will let you burn a music playlist to a cd, which reminds me that I need to do exactly that when I get home)

In truth, I don’t own a lot of films or tv shows, and several that I do have been gifts. But the ones I really enjoy? The ones I want to watch every Halloween, or whenever I’m feeling sad for no good reason at all? I buy physical media.

The downside is that, with our upcoming move almost certainly going to happen, we’ll be carting around physical copies. But like I said, I don’t own very many, so it’s no great burden.

Finally, yeah, sales of physical media are fading as streaming becomes easier and more profitable, but physical media won’t be going away completely. Smaller companies are already jumping in to capture that market.

My suggestion: support them. Own your own stuff.