On Tuesday, I tweeted this:

At Target, my 13yo tried on a white fedora. It looked damn good on him. Then he sighed, said “The internet ruins everything” and put it back

We were at Target solely because there’s a Best Buy on the floor below, and he wanted to get a new headset for his computer without waiting for online delivery. And why not pop in to Target to see if he could replace his old Minecraft baseball cap?

He looked good in that fedora, but he went with a plain black cap instead. Then we got home and discovered the headset was fucked up.

His mom took him back there yesterday to return the headset for a new (more expensive! grr!) model, and while they were there, he decided to rethink that hat.

Picture posted with his permission: 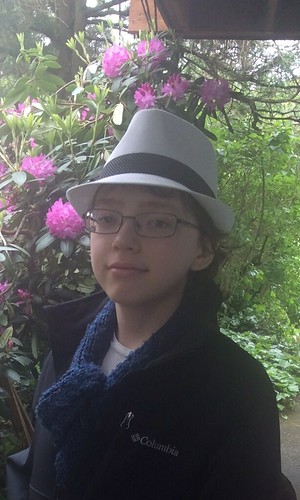 When he was small, we always said The days take forever but the years fly by. Now that we know we may only have him for another six years, it doesn’t seem like enough.