After being six months past the “there’s-no-way-these-books-will-take-longer-than-this” deadline, I finally ordered the trade paperbacks for my new trilogy, The Great Way. The expected delivery date from UPS was last night, and I rescheduled a bunch of work so I would be ready when the boxes of books arrived (16 of them) and could slip them into the already-addressed and sorted envelopes.

Then, on Tuesday morning, I double-checked the UPS tracking numbers and realized the books had been bumped a day, to Wednesday. Sure, the boxes had arrived in Seattle before 3 am on Tuesday morning, but apparently UPS needed 30 hours to get them on a truck.

Do I need to say I was disappointed and angry? I griped about it on Twitter, and a UPS help account encouraged me to email their customer service department with the tracking numbers and other details to confirm that they were actually sitting in a warehouse down in south Seattle.

The customer service rep confirmed it. My books, which had been delivered to Seattle the night before, still had not been unloaded and sorted. I’d have to wait for them to be delivered the next day.

My son, to my great surprise, believed me when I said I needed his help. He got off his computer (not a small deal) so he could slip bookmarks into books so I could turn to the title page quickly and seal envelopes. When my wife got home at 9pm after a long day of physical work, she cheered to see us working together, then chipped in.

I started alone at 5:30. We sent the boy to bed at midnight. My wife and I didn’t finish until almost two am. This morning, we got up early, called a cab, and transported all the books to the local post office to mail them out.

Pictures behind the cut. 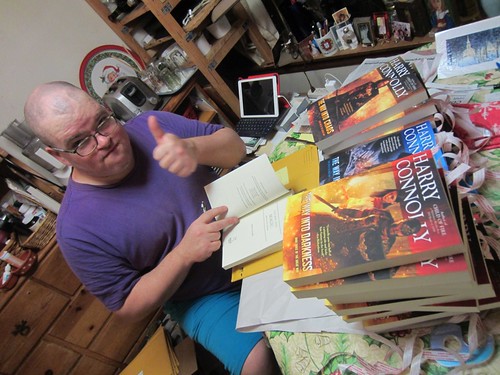 Still early, when I had the strength to extend my thumb upwards: 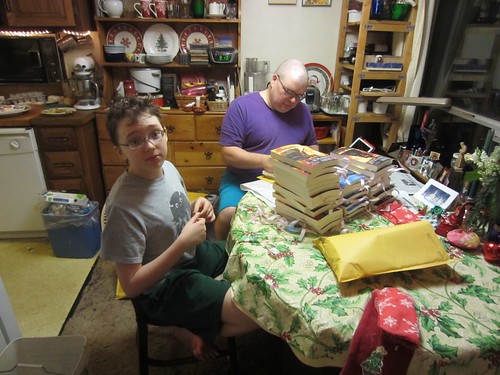 Doesn’t he look happy to help? He turns 13 in less than two weeks, by the way. 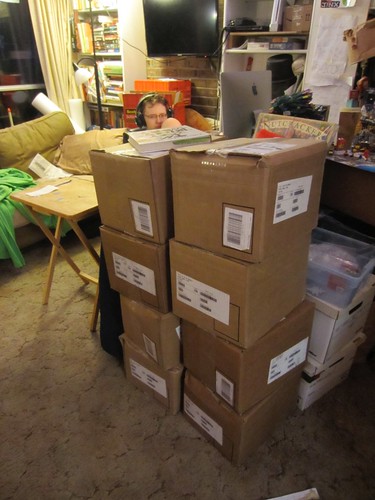 His usual perch, obscured by half the shipped books. 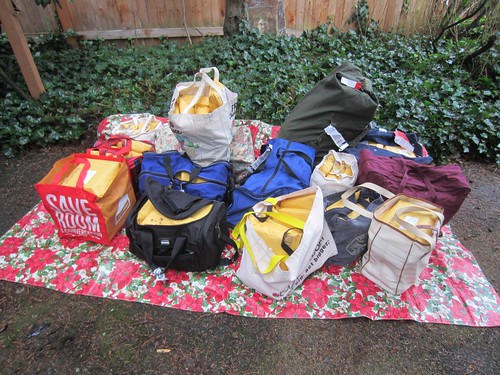 Our mailing envelopes packed together, in pretty much all the luggage we own. Confession: I seriously underestimated the amount of space the envelopes would take up. I honestly believed that big army duffel would hold maybe 75% of the whole shipment. Instead, it didn’t even hold all of the single-book envelopes. 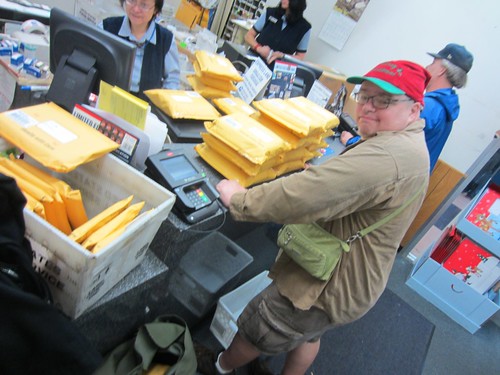 Didn’t the other patrons at the post office love us? And yes, that’s my (wife’s) purse.

The good/bad news: we get to do it all over again when the hardbacks arrive.