It’s always challenging to cook in someone else’s kitchen, right? Well, I impressed myself with today’s pepperoni frittata. Let’s pretend you tasted it and were impressed, too.

Today was a prep day. My wife and her sister have a friend flying in from Italy—a friend they haven’t seen in years and years, but have kept in touch with—and they’ve decided to surprise him with a traditional American Thanksgiving meal: roast turkey, sausage stuffing, cranberries, mashed potatoes, apple pie, the whole deal.

But first, supplies: I was excited to go to the old bull-fighting ring with my son. There was a food court where he and I could sit with our laptops and while away a few hours, and there was shopping to be done.

Unfortunately, the bull-fighting ring was mostly a shopping mall, and the food court was cramped and noisy as hell. To me, it was just an indistinguishable clamor, but it really bothered my son. We tried to slip away to a quieter place, but their internet wasn’t working. In the end, we just went back to the apartment and did a little work. Too bad. I would have liked to have pretended part of my new book was written in a bull-fighting ring, even if no one knew the truth.

Oh, and there was a bookstore but nothing I could read, of course.

Lots of quiet and lots of cooking today. 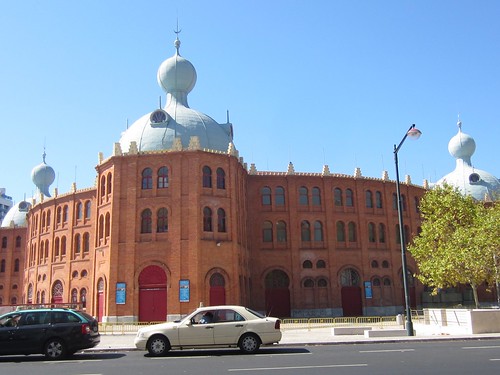