There are, in fact, two walking tours to take in Tomar, Portugal. One goes through the historic part of town, and the other trudges up the hill to the castle and convento.

The boy has issues with foot pain, so he only had to do one, and naturally he chose the one on flat ground. The tour of Tomar was enjoyable enough. We saw a beautiful old church with a relic inside, and very modern river walks, and the oldest synagogue in Portugal, which was shut down in the 1500s sometime due to forced conversion. We also saw that a bunch of the restaurants in town were closed and that the beautiful old churches were holding mass. Hello, Sunday.

After an unsatisfying lunch (the boy had already eaten from a Grab n Go automat-type thing) we started toward the long uphill trek to the castle. My feet already hurt. My wife’s knee was aching (she hadn’t taped it correctly, somehow) and my sister-in-law’s foot and ankle were sore, but we were determined.

And what did we see but a little train-car parked in the Praça da República, ready to take us up to the castle? By “train-car”, I mean that it was a four-wheeled car with a chassis like a steam train, and three passenger cars that it towed along behind. So we didn’t have to walk up the hill after all.

The castle was a castle. If you’ve been to Europe you’ve probably seen a bunch, but this was my first trip and I’d never walked along a castle wall before, or looked through the archery slits, or stared up at the gates, imagining myself storming the place. It was pretty cool.

The Convento de Christo was even cooler, full of multiple levels and one cloister after another. I would have been lost in that place in flash, if I’d ever been a novitiate.

Of course there are pictures. 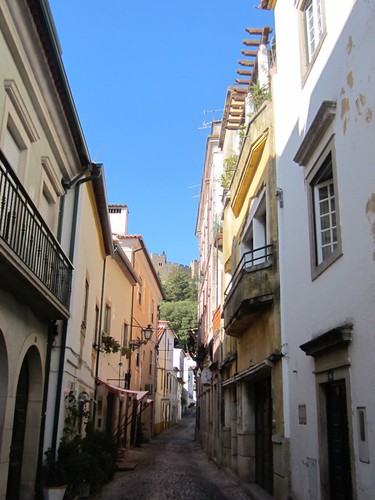 We caught the last train-car back, then hunted everywhere for good food. We failed to find it, but we did get some calories. But no meal, no matter how disappointing, could darken the day we had.