For the fourth day, the boy stayed home while I accompanied my wife and sister-in-law on a shopping trip. When we do our shopping in Seattle, we go to the local supermarket, get everything we need, then haul it home. In Lisboa, there were vegetable stalls in the church parking lot, a butcher shop, then a big market building that held a number of different sellers displaying fish, meat, veg, the whole deal. We even ordered a turkey from yet another butcher shop. After that, it was the health food store so my wife could have some gluten-free foods.

It felt very European, which means we walked around a lot.

After, we dropped by my sister-in-law’s health club for an afternoon drink at an outside table.

This is what everyone imagines themselves doing in Europe, right? You sit outside with a little coffee or a whatever, enjoy beautiful weather, chat, and people-watch.

Sadly, it doesn’t take long for me to start feeling antsy. I should be writing. I could be reading. I could be jotting down one of these posts. Taking it easy is hard.

Then, in the afternoon, we caught the subway to Gare do Oriente, their big train station, and then took a two-hour local train to Tomar. You pronounce the name of the town Too-MARR. If you raised your hand in a flourish with that last syllable, you’d get the spirit of the thing.

My brother-in-law was about to record an album, and he needed the apartment space to put up the musicians who were coming into town to play. So this was our first big tour of the country, and it was coming quickly.

Tomar was founded by a Templar, and there’s a castle (a castle in Europe? No way!) but the Convento De Christo is supposed to be the real reason to visit. It’s supposed to be unique and amazing.

We made our way to the guest house my sister-in-law had reserved, which sounds like we had our own little house, doesn’t it? Nope, it was a funky old hotel called Residencial Uniao Take a look. Or: https://goo.gl/maps/ztQxQp7hchu

If you back up that street view, you’ll see the Praça da República and the statue of the Templar who founded the town. But we have pictures, too. 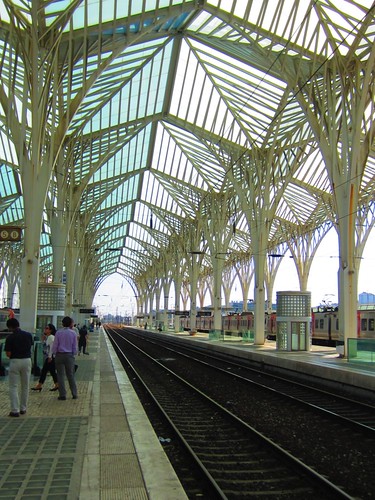 Still, it was too late to do anything but eat, and since the tourist season was closing, it was tough to find a place. Luckily, we came across an Italian restaurant with wisteria growing along the patio. I had chicken with blood sauce, which tasted a lot like blood sausage. The boy, sadly, ordered more shrimp, and was disappointed when they arrived with the heads still on. He’s going to give up on shrimp for the rest of our trip.