Four times a year, for three days only, the Museum of Lisboa opens the city’s Roman galleries to the public, and since the fall dates were perfectly timed with our visit, my sister-in-law arranged for us to go.

One problem: the Galerias Romanas were on the Rua de Prata (the street of silver, because that was once the street all the silver smiths were on) but there was no further detail. It was somewhere on that street, which is about 8 blocks long. We were told that people would need to arrive at the meeting place 30 minutes early, and that we couldn’t leave bags near the monument, but there was no address included with the reservation confirmation. What monument? What meeting place? An email sent to the museum asking for an address was never answered.

And this is something my brother- and sister-in-law explained about Portugal: as cultures go, it’s very non-confrontational. Passive, even. People drive like crazy, but they rarely honk. People are routinely late, only to find the person still there waiting for them, an hour past the time they agreed to meet, and no mention of the delay will ever be made. People will lie to your face to avoid saying something that might upset you.

So you end up with things being done in a half-assed way, because there’s no strong/systemic correction. A major city museum will tell people to be at the meeting place a half hour early but never specify where the meeting place is.

This sort of thing will come up again during our trip.

Anyway, we walked down the Rua da Prata and, a block from the end, I saw a cordoned off side street, a hole in the asphalt, and a woman in street clothes being helped down.

The galleries themselves were pretty cool, but not extensive. I have pictures, naturally, and the tour guide explained that they’ve been rediscovered several times over the centuries, often so that shop owners could use them as free storage. In fact, that was probably what they were built for originally.

Also, GMs: you are not getting the smell of your dungeons right.

Sadly, they’re prone to flooding, and one shop-owner’s brilliant idea to store sacks of cement down there has severely damaged one section. Also, they were blocked off in the 1800’s. The only evidence that there are more galleries are the drawings made years and years ago; the only way modern archaeologists will get access to the hidden galleries will be if a shop owner digs down and uncovers them. Unfortunately, shop owners know the galleries are there and they won’t do that, because they would have to notify archaeologists and it would be a mess. It will probably take another massive earthquake to open them up for study. 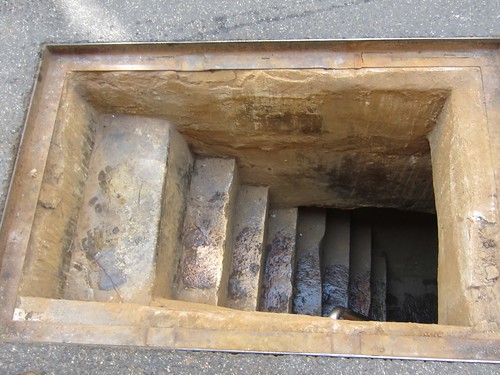 Afterwards, my son was a little freaked out by the smell, how dirty they were, and how dirty he’d gotten down there. (It didn’t help that the tour guide talked about sewage floods in the distant past.) I took him back to the apartment while my wife and her sister hit the town. They had a great time and saw amazing things. We slipped out to a restaurant where no one spoke English, ordered skewers of bacon-wrapped beef.

Inedible. The beef still had the silverskin attached, so it was impossible to cut the pieces small enough to eat using the dull knives we’d been given. It wasn’t all that easy to chew, either. The bacon was undercooked, so it was all soft and squishy. It also had tiny bones in it. Bones in bacon? I didn’t even realize that was possible, but there were tiny round chips in there.

You know how American food is sometimes derided as meat, carb, and two veg? (As thought that’s boring?) Well, Portuguese food is meat, two carbs, and no veg at all. The menu item will only list the meat; it’s assumed you’ll want a plate of fries and a plate of rice with it. I ate a bit for politeness’s sake, then we got out of there.

So far, Portuguese cuisine isn’t winning me over, and the boy has been decidedly uncomfortable with it.