The first day of any vacation is the actual traveling. I don’t much like flying, and I certainly don’t like waiting around with luggage piled beside me. This trip we did a lot of both.

We flew British Air, which was a pretty good choice, and we arranged our travel so there would be several hours between our non-stop from Seattle to Heathrow and Heathrow to Lisboa. Turns out, that was a good idea.

The first leg was yet another red-eye, which is a habit we just can’t seem to break. However we were smart enough to upgrade ourselves to rows with a little extra space. I don’t even remember what we paid, but I’m glad we paid it. We had extra leg room, space to stand and move around, and TV screens inset on the seats in front of us so we could entertain ourselves with some video on demand during the flight.

I watched KINGSMAN, which wasn’t nearly as cute as it thought it was, then TERMINATOR: GENISYS, which was way too far up its own ass. After that, I was tempted by RUN ALL NIGHT, but after flying all night, I was really tired, so I went with a comfort viewing of AVENGERS: AGE OF ULTRON, which I liked more the second time than the first.

Unfortunately, my 13yo son, traveling with us, came down with a serious cold just before we left. He went through five travel packs of tissues on the first leg, and that’s only because the Nyquil hit him hard and he slept most of the way. Me, I can’t sleep on planes.

We landed at Heathrow on time, which was great. But the tunnel wouldn’t connect to the plane, so they had to drive in a set of stairs. That’s half an hour, for some reason. Then the guy driving the stairs got into a collision, so we needed another one. The flight was over 9 hours, and we spent an extra 45 minutes cooling our heels on the plane.

Then we had to get from terminal 5 to terminal 3. The envelope our boarding tickets came in said this took NINETY MINUTES, but I thought that was nuts. It wasn’t.

First you walk all over hell’s creation. Then you get into a bus. The bus goes to terminal 3, but don’t get off the bus here, this is the part of terminal 3 where they pick up more people who need to get to terminal 3. Then we rode the bus all over the goddam airport, for at least 20 minutes. Once they dropped us off, we still had to walk down endless corridors, up stairways, down stairways… It was ridiculous. I’d like to see a map showing the path we had to walk, because that was some bullshit. There has to be a better way.

At least we got there with just barely enough time to eat a meal, buy more tissues and run for the connecting flight… which was also delayed. Once we were loaded aboard, the pilot announced that another plane had spilled jet fuel all over the runway. We sat for 30 minutes while they cleaned it up.

The flight from Heathrow to Lisboa was cramped and unhappy, except for the view out the window. This was my first trip to Europe, and I enjoyed seeing the countryside, the coastlines, the mountains, and of course, Lisboa, as we circled the city. It was beautiful.

My sister- and brother-in-law have a great apartment in the city. She’s an artist. He’s a musician. As you would expect, their home’s beautiful and funky and extremely comfortable. I’m glad my wife and her sister are close, because we get to stay with them and ruthlessly exploit them as tour guides.

Also they had a little cafe on the corner of the block. That’s where we learned that when you want coffee in Portugal, you get espresso. No drip, just espresso, maybe with some milk added or something.

Plus, the pastries are very very sweet.

And Portugal, we’re going to have to talk about your electrical outlets. 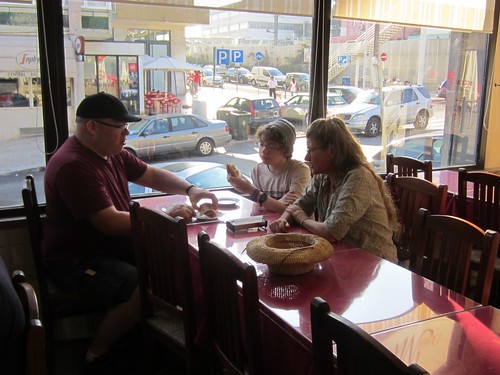 Click the photo to see two more. Pic not showing up? A link.