For the first full day in Lisboa, my sister-in-law arranged a tour by tuk-tuk.

Curious what I’m talking about? They’re motorized tricycles with a limited number of seats, and they look like this (scroll down to the gallery) http://www.tuk-tuk-lisboa.pt

Ours wasn’t quite like those. It was an electric vehicle, it seated six (including the driver) and it had four wheels. It also had no doors at all, was very narrow, and had a top speed of, like, 25 mph.

And man, did we go up and down hills and through alleyways while the driver told us about the history of the city.

Our first stop was the location of a large, incredibly important peaceful revolution that took place in my lifetime that I personally knew nothing about. Like, zero. I kept nodding while the guide spoke, as though of course the history of his country was crucial knowledge for an educated American, but I felt distinctly like a student faced with a pop quiz after a long night of partying. Then we moved on to more distant past, and phew for that.

It seemed that Lisboa was originally built by Arabs, and the streets were narrow and twisting. A massive earthquake in 1755 destroyed the old city and killed about 10-15% of its inhabitants. When the city was rebuilt, the mayor of Lisboa defied the power structure and had the city constructed with wider, straighter avenues.

According to our guide, at least. Wikipedia tells its own story. https://en.wikipedia.org/wiki/1755_Lisbon_earthquake

He took us to beautiful views of the city, ancient downtown buildings, and the Praça do Comércio, which he assured us is the largest public square in Europe (although Wikipedia says it’s not even the largest square in Portugal). After, we went to Docas for a late lunch. I had a Prego, which is a traditional sandwich (ingredients: a roll, some beef, some garlic, that’s it).

My son had shrimp, which were served with the heads on. He ate none of those, although our tuk tuk driver assured him many times that it was no big deal and that he should just pull the heads off and suck out the brains because they were so tasty.

Guess how well that worked.

The driver was an interesting guy. We couldn’t trust half of what he said on his tour. He drove us through those “Arabic” streets that were so narrow my wife and I could have held hands and touched the walls on either side without fully extending them. He stopped in at a little tchotchke store where the owner gave us each a shot of ginjinha https://en.wikipedia.org/wiki/Ginjinha a sour cherry liqueur, and of course we bought a couple of things (that we wanted anyway).

But he also brushed off any talk of Portuguese colonization as nothing more than a search for trade and women. He dropped the “n” word a few times, informed us (with a touch of pride) that his people invented the term mulatto, talked about the Porsches and BMWs he saw on the road, and elbowed my ribs when he saw a beautiful woman on the street. Like a lot of places, Portugal is full of beautiful women.

I don’t often meet guys like that. Basically, friendly, toxic bros who know less than they think but who are completely charming otherwise. Plus, it was a gorgeous city, and he was so proud of it.

Overall, a weird day, but a great day. Have some pictures. 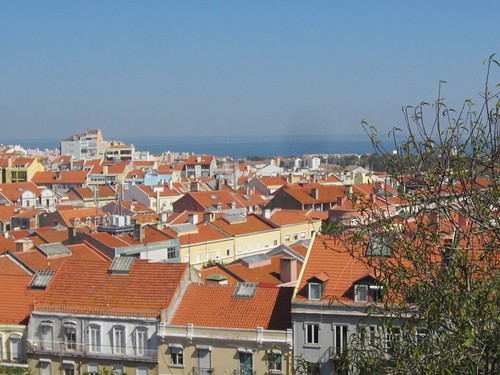 Click the pic for more images. Can’t see it? A link.