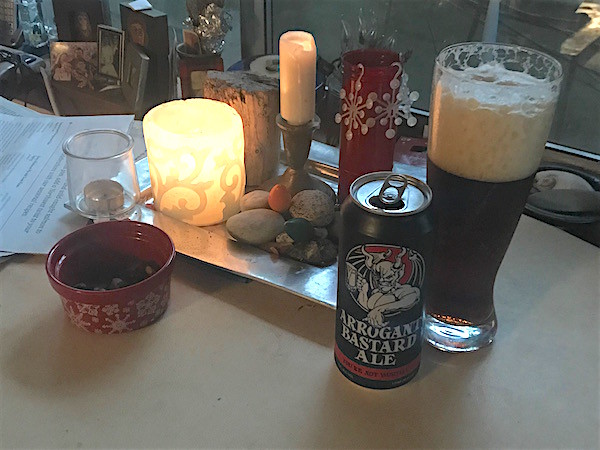 I used to buy Arrogant Bastard Ale in a 22 oz bottle, but everything’s in cans now.

Maybe this makes me an old, but cans still feel cheap. The beer tastes fine, but it’s not as pleasurable to drink.

But yes, this means that my latest WIP is sitting in my agent’s inbox, after 8+ months of work.

It may seem that I haven’t released much new work in the last few years, and you’re not wrong. Since putting out The Great Way and Key/Egg in 2015, I’ve only released that new Twenty Palaces novella. One Man took nearly two years to write, and it floated from publisher to publisher for a year and a half before the submission process ended.

I have to give it another revision before I decide what to do with it, and it’s going to take at least as long as my revisions for the WIP. One Man just needs another polish, I think, but it’s also 50K words longer…

Plus, there’s a mystery that I need to polish and release. (This is going to sound weird, but I can’t remember the title for it. I’ve had so many they’ve become a blur.) It’s a good book, but I’m going to have to publish it myself.

Once those are done, I can pounce on the next Twenty Palaces novella, which exists as a rough idea in my head but needs a bit of work to tease out. And mixed in with all of that is the next draft of the WIP… based on my agent’s notes.

So, I’m busy and things have not been auspicious in my writing career. Still, it’s important to celebrate the little milestones.

I thought I’d pop in and update things for folks, writing-wise.

First, earlier this week I sent a new novel to my agent. It’s a crime/mystery novel, a genre I’ve been reading for years. This isn’t my first attempt at this style, but it is the first one that I feel comfortable with. Some aspects of it fall right down the middle of the genre, while some are probably all wrong and will make me tear my hair out in revisions. We’ll see! But it feels good to start a book and send it to her in under six months. I’m not usually that prolific.

Which means I’ve returned to revision on my Twenty Palaces novella. I know I’ve been talking about this for a while, but this mini-book has resisted several attempts to write it. At this point, I feel I’ve solved most of the problems and hope to have it on sale before the end of the year.

Once I finish that, I’ll be working on something new. No idea what it will be, but I’m just going to pick an idea that sounds cool and run with it.

Thank you for reading this, and being here.